The rise of Donald Trump, Brexit, Geert Wilders, and Marine Le Pen can be seen as a reaction to the failure of Western liberal establishment culture to successfully lead the transition to global society. These popular figures represent a return to the last successful level of social development—nationalism.

We could say that this a reset. The leading edge of Western liberalism has become dysfunctional.  An integral worldview should supply the necessary elements that liberalism has so far ignored in its zeal to create a more just and inclusive world.

Liberal culture has over-reacted to the limitations of traditional societies that needed to be transcended and included. Those who led the social revolutions of the 1960s tended to “throw out the baby with the bathwater.” They reacted like children who had matured enough to sense injustice, but not developed a broad enough view to ask, “What values in our traditional societies enabled us to evolve this far?”

While a few extraordinary figures like Martin Luther King, Jr., and Mohandas Gandhi sought to move to the next stage of development on spiritual foundations, the masses engaged in social movements that sought political solutions—solutions based on the force of law. The force of law can be used to punish those who do harm, but does not create a higher spiritual perspective. In fact, in the absence of changes in heart, government programs created to serve the needy inevitably become sources of theft, corruption, and political dysfunction. Today, our political parties fight like children over the resources of society without showing concern for society as a whole. The West is currently taking a step backward in order to regroup and move forward in a more integral manner.

Philosopher Ken Wilber has recently published a path-breaking book, Trump and a Post-Truth World: An Evolutionary Self-Correction, that analyzes the weaknesses of liberal culture from the standpoint of the failure of growth in spiritual consciousness. Wilber’s integral worldview sees culture as going through a series of developments analogous to the development of the consciousness of individuals from birth to mature wisdom. Everyone’s path begins with total self-centeredness and moves towards maturity by expanding awareness and knowledge by transcending and including previous levels of consciousness.

Wilber uses the term “meme” to describe levels of consciousness. The “red (egocentric) meme” is closer to animal consciousness and might be portrayed by babies that kick, scream, and wave their arms when they don’t get their way. The “amber (ethnocentric) meme” is a bit more developed and uses rationalizations and dogmas to get its way, but still contains an element of oppression or coercion. The “green meme” that took hold in the cultural revolution of the 1960s recognizes the oppressive elements in the traditional meme, but was caught in too narrow a view and reacted against the previous meme, rather than transcending and including it—which would be an integral approach.

When people use words like “fight for peace,” they display an opposition mentality, not a mentality of inclusiveness.

Wilber sees as one of the main failings of the green meme the idea that “the lack of green values (egalitarian, group freedom, gender equality, human care, and sensitivity) is due to a presence of oppression. Lack of green = presence of oppression.” However, “the major problem with that view taken by itself is that it completely overlooks the central role of growth, development, and evolution” (p. 39).

Wilber argues that oppression is not the primary cause of unfreedom, but the absence of higher development. So long as the greens think that removal of oppression is a cure, they will never solve their problem. So, “it is not true that lack of green = presence of oppression: it is that lack of green = lack of development” (p. 40). “If we think that green values should be found universally, and their lack unerringly indicates an oppressive force, then we will see nothing but victims everywhere…. Our cure for this will not be to instigate factors that will help growth and development, but to punish and criminalize those at lower stages of development who are acting in oppressive ways” (p. 4, author’s italics). Thus, “to see intentional “oppressors” and “victims” everywhere is to totally mis-diagnose (and thus mis-treat) the illness (p. 42).

Wilber argues that the willingness for the greens to include “the deplorables” (those in an amber meme) in a national dialogue about cultural development — but to label them as racist, sexist or homophobic — is to be guilty of political correctness, which is simply another religion in the amber meme. To the politically correct greens that idea of development and growth for anybody is totally anathema because we have to accept everyone as they are, not that they are as they are because of the stage of development they have attained. Thus, “although the green will not allow the existence of any ‘higher’ or ‘better’ views, it still deeply feels that its own views are definitely ‘higher’ and ‘better’” (p. 43). This makes it an ethnocentric view, incapable of the inclusiveness it espouses.

Without a concept of growth and development, and without understanding there are hierarchies of development and actualization, those in the green meme do not have a “single path that actually works” (p. 46).

“One of the simplest points here is that for green to move from its extreme dysfunctional, unhealthy, and pathological condition to a state of healthy, vibrant, true leading-edge capacities, it is absolutely central that green heal its catastrophic confusion between dominator hierarchies and actualization hierarchies. Actualization (or growth) hierarchies are not exclusive and domineering, they are inclusive and integrating” (p. 52).

We have heard an increasing number of liberals realizing that the hatred, name-calling, and ridicule of mainstream Americans put Trump in office. “The leading-edge cannot lead if it despises those whom it is supposed to lead….” (p. 57). Wilber argues that the failure of the greens was a lack of compassion:

“It is precisely a lack of compassion, care, and understanding that broken green avidly displayed (in academia, media, entertainment, and liberal politics); and more than any other single item, this mean-green-meme attitude is what led to the huge reservoir of resentment that led to Trump’s previously unimaginable win… It was a very high level of development that was infected with a low level of development. It was green pluralism infected with red narcissism/egocentrism” (p. 62).

After the green gets over its initial reaction against all hierarchies and abandons the idea that it has the complete truth, it will be able to begin healing. Many of the values espoused by Republican Party ideals (as opposed to Republican Party behavior), like responsibility, self-control, balanced budgets, and spiritual values, need to be transcended and included, rather than despised, ridiculed and excluded.

Wilber’s idea of moving from green consciousness to integral consciousness is a contemporary way of saying we need to adopt a parental heart, one that recognizes everyone is a child of God at some stage of development on their path from childhood to attaining a divine consciousness. Those people recognize others as God’s children who also need the tools to overcome evil, and work productively and responsibly to care for others. The confusion between oppressive hierarchies and actualization hierarchies needs to be overcome in the liberal worldview. 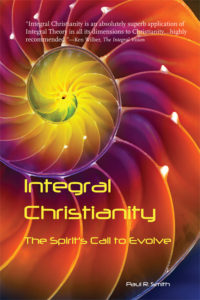 In Integral Christianity: The Spirit’s Call to Evolve, a Paragon House book by Paul Smith, presents the “perspectives of integral theory and practice, articulated by Ken Wilber, that help uncover the integral approach that Jesus advocated and demonstrated in the metaphors of his time – and that traditional Christianity has largely been unable to see.” Smith is involved in the needed liberal reset Wilber is calling us to. By providing a model for “transcending and including” the values of a cultural system (Christianity) that had reached limitations in its “amber” meme, yet had values to carry forward that the ecumenical movement in the “green” meme has yet failed explain.

Traditional evangelical Christians largely remain in the “amber meme” and promote a form of exclusivism. Yet their value system includes concepts of inequality in growth that were not essentially oppressive but promoted a Christian perfectionism that led to a tremendous work ethic “to glorify God,” and great desire to serve others through voluntary organizations, as opposed to attempting to use state force. Perhaps this is why many of these Christians supported Trump during the time of this reset for liberal Christianity.

The ecumenical movement in the churches was a spiritual precursor to the green meme in the culture at large, but ecumenical dialogues stressed rights and inclusiveness while ignoring responsibilities and limitations on behavior when it causes harm to others, or the environment. Ecumenical dialogues and genuine unification need to transcend and include past teachings that served a necessary purpose of human growth, economic development and social stability. This includes a reevaluation of the Ten Commandments, the parables of Jesus, and the sacred teachings of all religions in light of how they enable societies to function as they evolve from red through amber, green, and higher memes.

Watch for and Afterword by Ken Wilber on Paul Smith’s next book, Is Your God Big Enough? Close Enough? You Enough?: Jesus and the Three Faces of God.

“With this book Smith continues his pioneering application of Integral Theory to Christianity. He shows the true and often hidden meaning of the Trinity. He says that Jesus’ experience of the Trinity ‘had three uniquely different personal relationships with three different faces of God.’. . . giving you a total of a very real, very genuine nine experiential realities! And this gives us a staggering increase in our understanding of Christianity! This is indeed another and major contribution by Smith to the manifestation of a truly Integral Christianity.”—Ken Wilber, author of The Integral Vision