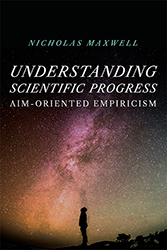 The Danger of Science in a World Without Wisdom

One can imagine many contenders for the crisis of our times: climate change, nuclear weapons, rapid population growth, mass extinction of species, pollution of earth, sea and air, gross inequalities of wealth and power. All these are serious, but they are all consequences of an even graver, more fundamental crisis: science in a world without wisdom.

The astonishing intellectual success of modern science and technology has led to a vast panoply of benefits for humanity. It has made the modern world possible. But it has also made possible all our current grave global crises. Scientific and technological progress led to modern industry and agriculture, modern medicine and hygiene, modern armaments; these in turn have led to habitat destruction, extinction of species, pollution, gross inequalities, lethal modern war, nuclear weapons, and climate change.

There are those who blame science for this tragic state of affairs, but that misses the point. The real problem is science in a world without wisdom. The extraordinary successes of modern science and technology have bequeathed to (some of) us unprecedented powers to act, vastly in excess of anything possessed by earlier generations. Exercising these powers, often we do good, in curing disease, feeding the hungry, and providing all the amenities and luxuries of our modern world. But without wisdom, inevitably our unprecedented powers to act will do harm, whether unintentionally, as when modern life leads to global warming, or intentionally, as when modern weapons are used in war and terrorism.

Before the age of modern science and technology, we lacked the power to do too much damage to ourselves or the planet. Now that we possess powers to act far exceeding anything of previous ages, lack of wisdom has become a menace. In the age of modern science and technology, wisdom has become, not a private luxury, but a public necessity. We must become a bit wiser to survive.

How Can the World Learn Wisdom?

That makes it a matter of supreme urgency to answer the following question: How can the world learn wisdom? How can the world acquire enough wisdom to avoid using our scientific and technologically enhanced power to cause devastation, suffering, and death (whether intentionally or unintentionally)?

The hope that humanity might acquire wisdom is as old as the hills. Ancient Greek Philosophers sought wisdom. Buddha, Jesus and other prophets hoped humanity might acquire wisdom too. But our modern history reveals, not growing wisdom, but rather an extraordinary confusion of achievement, nobility, stupidity, and savagery. There are even those, such as John Gray, who pour scorn on the whole idea of humanity becoming wiser, even to the extent of condemning the very aspiration as causing untold misery. Pessimism about humanity achieving social progress to a better world is rampant, helped on by such recent events as Brexit, Trump, and the rise of far right political parties in Europe and elsewhere.

The key to how it may be possible for humanity to acquire a bit more wisdom is, however, almost universally overlooked. It is this: We may be able to learn from scientific progress how to achieve social progress towards a better, wiser world. The very thing that has created the crisis of our times—unprecedented scientific progress—may also contain within it the key to the solution to this crisis: how to achieve social progress towards a wiser world.
This is not a new idea. It goes back to the 18th century Enlightenment. The philosophes of the French Enlightenment, in particular, did everything they could to put this idea into practice in their lives, and it had astonishing repercussions for subsequent history.

The Philosophes Botched Implementation of the Basic Enlightenment Idea

Unfortunately, in putting the idea into practice, the philosophes made three monumental blunders. They botched the job. And it is their botched version of the basic idea that was subsequently taken up by others, throughout the 19th and 20th centuries, so that it is now built into our institutions of learning, into our schools and universities, all around the world. Our universities embody the magnificent idea of the Enlightenment, but it is a botched version of this idea, and it is that which we suffer from today. It is that which sabotages our attempts to anticipate and solve our grave, science-induced global problems in increasingly effective, intelligent and humane ways.

If we are to put properly into practice the magnificent idea of the Enlightenment of learning from scientific progress how to achieve social progress towards a wiser world, it is absolutely essential that we get the following three steps right:

Unfortunately, the philosophes of the Enlightenment got all three points disastrously wrong. They failed to identify correctly the progress-achieving methods of natural philosophy; they failed to generalize these methods properly; and, most disastrously of all, they failed to institutionalize them properly so that humanity might learn how to become more humane by rational means. And versions of these blunders are still built into academia today.

Even today, scientists take for granted what the philosophes took for granted: the basic intellectual aim of science is truth, the basic method being to select theories solely on the basis of evidence, empirical success, and failure. No! The basic aim of science is not truth per se, but rather the highly problematic one of truth presupposed to be explanatory. There are profoundly problematic metaphysical assumptions inherent in the aims of science, and problematic assumptions concerning values and social use of science.

As I spell out in some detail in my book Understanding Scientific Progress (Paragon House, 2017), we need a new conception of science that represents science in the form of a hierarchy of aims. This hierarchical framework provides the means by which the most specific and problematic aims, low down in the hierarchy, may be progressively improved in the light of what leads to the greatest empirical success, and at the same time accords best with less specific, less problematic aims, high up in the hierarchy of aims.

This aims-and-methods improving conception of the progress-achieving methods of science can be generalized to apply, in a potentially fruitful way, to all worthwhile human endeavours with problematic aims. Above all, it can be applied to the heart-rending endeavour to make social progress towards a better, wiser world. The aim of this endeavour is permanently and profoundly problematic for all sorts of more or less obvious reasons. Here, above all, we need to try to improve our aims as we act. It is vital that we build into our progress-seeking social endeavours—politics, industry, agriculture, finance, law, education, diplomacy—the aims-and-methods improving methodology generalized from that of science.

So difficult is this to do, that the endeavour needs all the help it can get from academia, specifically from social inquiry. Indeed, a fundamental task for social inquiry is to help build into our institutions, into the fabric of social life, the aims-and-methods improving methodology I have indicated. Social inquiry, conducted in this way, has the character of social methodology, or social philosophy. It is only secondarily social science—engaged in the pursuit of knowledge of social phenomena.

The upshot of the argument is that we urgently need to bring about a profound and far-reaching revolution in the social sciences: economics, sociology, anthropology, psychology and the rest. These disciplines, properly conceived, have as their basic task, to help humanity resolve conflicts and problems of living in increasingly cooperatively rational ways and, in the long term, build into institutions and ways of life aims-and-methods improving methodologies generalized from those of natural science. It means, more generally, that we need a revolution in academia, so that the basic aim becomes, not just the acquisition of specialized knowledge, but rather the promotion of social wisdom—wisdom being the capacity, the active endeavour, and perhaps the desire, to realize what is of value in life for oneself and others, wisdom so construed including knowledge and technological know-how, but much else besides.

This is not remotely how universities are conducted today. Why not? Because they are still in thrall to the blunders of the Enlightenment. The worst blunder the Enlightenment made was at the third of the above three steps. The philosophes thought the task was to apply progress-achieving methods, generalized from those of natural science, not to social life itself, not to problems of living, not to the great, problematic task of achieving enlightened civilization, but rather to the task of acquiring knowledge about social phenomena—to the task of creating the social sciences, in other words. And this monumental blunder has never been put right. It means we have failed to learn from the astonishing progressive success of natural science how to make some degree of comparable progressive success in gradually enabling our world to be a bit more humane, sane, just, equal and peaceful.